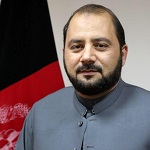 The Minister of the Ministry of Rural Rehabilitation and Development (MRRD), Mujib Rahman Karimi, born in 1977 in Khost Province, committed to serving his homeland and nation, is one of the special cadres of the country.

Mr. Mujib Rahman Karimi completed his primary and secondary education from Ghar Ghasht High School in Khost province and completed his bachelor's degree in Agriculture from Kabul University in 2001.

The Minister of Rural Rehabilitation and Development successfully completed his Master’s Degree in Regional Planning and Rural Development from the Asian Institute of Technology (AIT) of Thailand in 2014.

Prior to his appointment as the Minister of MRRD, Mujib Rahman Karimi had the honor of having 16-years of experience serving his Country in various fields including National and International Organizations.

From 2003 to 2007, Mr. Karimi worked as a Trainer and Capacity Building Manager for the National Solidarity Program of the Ministry of Rural Rehabilitation and Development (NSP/MRRD).

From 2007 to 2012, Mr. Karimi worked as a Field Worker and Coordinator for the United Nations Assistance Mission for Afghanistan (UNAMA).

In addition to this, during 2003, Mr. Karimi was appointed as a Professor and Head of the Agricultural Economy Department of Sheikh Zayed University in Khost province. Hence, his overall academic rights are still reserved.

After years of teaching, in 2015, Mr. Karimi was appointed as Chancellor of Sheikh Zayed University and made good achievements while proceeding with his responsibilities and mission.

Being awarded for considerable improvements and assuring quality of teaching methodologies and consistent efforts made in terms of restoration of ties between the United Arab Emirates and the Sheikh Zayed University are among the major achievements achieved during his career as Dean of the University.

On September 09, 2017 - as per the decree issued by H.E Mohammad Ashraf Ghani, the President of the Islamic Republic of Afghanistan, Mr Karimi has been appointed as the Minister of the Ministry of Rural Rehabilitation and Development (MRRD).